Q 1. What amount has RBI declared as dividend in its board meeting  recently, that will be given to its owner Govt of India  ?

Q 2. In the recently revised rules for taxation on angel investors , what is the new age of a company from.launch to be called a startup ?

Ans. 10 years from the earlier 7 years

Q 3. In 1936, 10 companies of one industry belonging to Tatas, Khataus, Killick Nixon and FE Dinshaw groups came together to form one company. How do we know that company today ?

Q 4. Which elevators major has launched ‘Vaastu’ compliant elevators to woo the customers in India who believe in this ancient philosophy ?

Q 5. Which hotel chain has entered the homestays segment with AMA Trails and Stays starting with Coorg ?

Q 6. Patanjali has launched its apparel line Patanjali Paridhan with a TV and digital commercial . The tagline is Tann Man Dhan _____ What is the last word in the tagline/jingle ?

Q 8. As per a Fast Company list which startup has been ranked No 1 as the most innovative from India ?

Q9. If D Mart is promoted by Damani ( R K), V in V Mart stands for Value Retail, what does J in J Mart stand for ?

Ans. Jaipuria the family name of the founder Ravi Jaipuria

Q 10. Which industrialist’s autobiography is tentatively titled ‘The Incomplete Man ‘ and has been restrained from publishing by the Bombay High Court ?

Q 12. Name this e-learning Guru in this picture with PM Modi ? 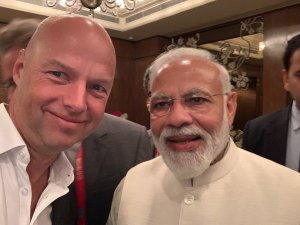 Q 13. P&G’s Tide Pods is a blockbuster product. But they are creating a serious problem due to which they are kept locked in supermarkets and homes. What is the problem ?

Ans. Tide Pods have an attractive shape and colour that make them look like candies and young children eat them. The detergent inside is dangerous

Ans. All are large defence and armaments suppliers/ contractors

Q 15. Founded in 2013 by Russian brothers Pavel and Nikolai Durov, this app allows even upto 200,000 members in its channel. Because of its many features superior to other messaging apps, it is very popular. So popular that Iran and Russia wanted to ban it. Name it

Q 17. Which fast fashion footwear retailer has announced that it will close all its 2100 odd stores in US and Puerto Rico ?

Q 18. What item made traditionally in India by hand is being made in an industrial scale by Leaf Republic as a clean tech product and marketed in the West ?