Q 1. Tata chemicals have sold their urea plant to Yara Fertilisers. In which country is Yara headquartered ?

Q 2. Which regional airline is run by Bangalore based Decor Aviation ?

Q 3. What is the term given by OLX for the value of unused goods lying in households and gathering dust ?

Q4. Which company is running a social campaign among truck drivers to “Use Dipper at Night” ? 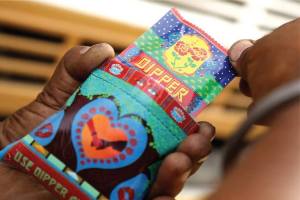 Ans. Tata Motors is promoting condoms called Dipper to prevent spread of HIV among truck drivers who are considered a high risk group

Q 5. What skill has CEO Jeffrey Immelt mandated every new hire in GE to learn ?

Q6. Which e-commerce site is Walmart acquiring in order to compete more aggressively with Amazon ?

Q7. What is the composition of the Gold Medals awarded in the Olympic games ?

Ans. Olympic Gold medals are required to be made from at least 92.5% silver, and must contain a minimum of 6 grams of gold. All Olympic medals must be at least 60mm in diameter and 3mm thick.