Q3. Name the designer of this iconic symbol that has been copied by many cities later. He passed away at the age of 91.

Q5. What is the name of the bank in Switzerland that has become a bone of contention between the kin of SP Hinduja and the other 3 brothers ?

Q6. Identify this app from its logo. This app is the 3rd most active app in India after Whatsapp and Facebook. It is also one of the Chinese apps banned by Indian govt yesterday

Q7. Which iconic camera brand that has been functioning since 1936 is being sold be its promoters to a PE firm because of 3 continuous years of losses from that division ? The camera division used to account for only 6% of revenue. Medical equipment being a major one. .

Q8.  What is the move by Fitch ratings that makes CANADA being called CANAD by Bloomberg ?

Ans. The downgrading of sovereign rating of CANADA from AAA to AA+, means it has one A less.

Q9. Why US Govt has objected to the US India flights being operated by Air India under the Vande Bharat mission ?

Ans. Air India was charging for the tickets , though it was supposed to be only a country mission to bring back citizens during the pandemic. The US govt said it was discriminatory to the US airlines

Q10. In US after the #BlackLivesMatter campaign, many companies are having a relook at their brands for e.g Aunt Jemima by PepsiCo and Uncle Ben by Mars. What is wrong with Uncle and Aunt prefixes ?

Ans.  The brands have a history of showing the blacks in poor light. In the US, blacks are addressed as Uncle and Aunt rather than Mr and Mrs.

Ans. They accuse these platforms of promoting divisive content.

Q 12. Name this iconic vehicle that was invented by Dean Kamen nearly 20 years ago. The company is now owned by a Chinese company Ninebot. It became popular among police and some niche applications. It is now going out of production. 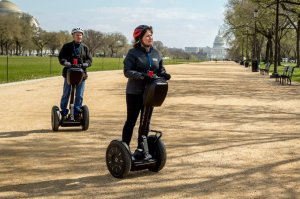