Q 1. Who was the issuer of the fake 2000 rs currency note that came out of an SBI ATM at Sangam Bihar, New Delhi ? 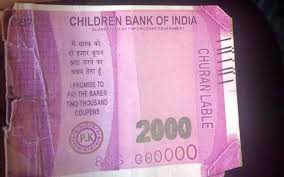 Q 2. How much salary cut have the Snapdeal founders taken in order to express the seriousness of the losses and job cuts ?

Q 3. What is Bharat QR and name the cos who have developed it ?

Ans. It is a simple payment mechanism using QR code , developed by Mastercard, Visa and NPCI

Q4. Zoom Air , a regional airline started commercial operations in Feb 15th. From which city to which city did it make its inaugural flight. ?

Ans. Delhi to Durgapur via Kolkata

Ans. Planet Labs had used the ISRO PSLV for launching 88 small satellites called doves which was part of the 104 satellites that made a record

Q6. Which company has sued the makers of Jolly LLB 2 because it shows their brand of footwear as a downmarket brand ?

Q7. Name the renowned Economist who was the youngest Economics Nobel winner at 51. He died recently at the age of 95.

Q8. Name the PE firm that is seen behind Kraft Heinz making a proposal to acquire Unilever. This firm also was behind the ABInBev consolidation.

Q9. In which product category is Ivanka Trump’s brands No 1 and No 2 in sales at Amazon after her father’s victory ?

Q 10. By virtually selling stock of which retailer has Warren Buffet signalled the end of organised big retail ?